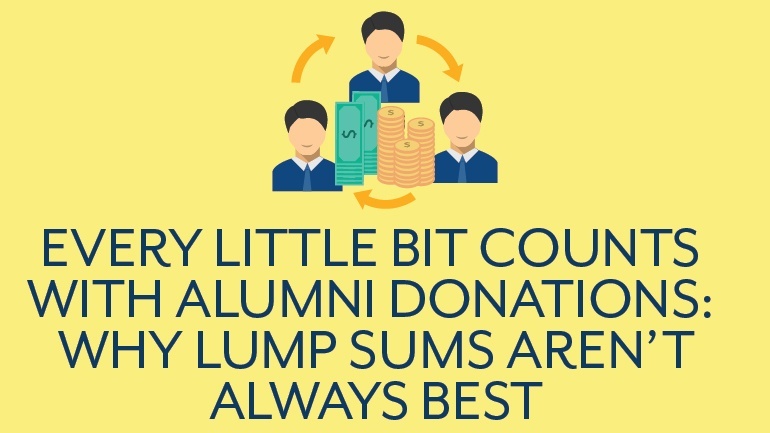 Alumni donations and your fraternity chapter go together like peanut butter and jelly, bread and butter, Greek Week and togas, brothers and their gym time. God help those who separate brothers from their gym time.

In other words, alumni donations play a crucial part in the livelihood of a fraternity chapter. While chapter membership dues cover what goes into a chapter’s budget, dues certainly can’t cover everything. Fraternity alumni give back to their undergraduate chapters for a variety of reasons, many of which focus on the well-being and growth of the chapter, or charitable causes they have undertaken.

However, at times a chapter will run a large-scale capital fundraising campaign for a project, such as a chapter house renovation, which costs anywhere from tens of thousands to millions of dollars. The idea in this case is to foster alumni giving over the extended period of the project, which could potentially last for years, and to do this through a healthy relationship between alumni and brothers.

It isn’t an easy task, to say the least. You might get so excited about a renovation project that your fraternity chapter hints that they’re putting one together in the chapter newsletter, and without any hard figures about the cost or outlook of the project, a few alumni get caught up in your excitement and give what they think is a fair amount, in one lump sum. However, once the project is underway it’s clear you’re going to need much more. But these alumni already gave. Why should they give a second time? You should’ve waited to come to them until you had an idea of what everything will cost, and a plan of how to implement your project.

But regardless of when alumni give, giving all at once can have the misleading effect of having a lot of money now, but coming up short later on when the project needs funds the most. What if there were a way to make giving easier, and make it more consistent toward a fraternity chapter’s goals, too?

Luckily for you, there is! It’s called recurring donations, and it’s a way to engage alumni more fruitfully over the full course of a capital fundraising campaign. That’s why Pennington & Company is happy to talk to you about why Every Little Bit Counts with Alumni Donations and Why Lump Sums Aren't Always Best.

Alumni Will Give More with Recurring Donations

For starters, recurring donations are typically easier on the wallet. Alumni often want to give back to their undergraduate chapters, but asking for a pile of cash up front is a good way to send anyone running the opposite direction. It can seem like a burden when a project is just getting started to try to envision how all your hard earned money is going to pay off down the line.

With recurring donations, alumni can invest a more reasonable amount at regular intervals throughout a project’s duration, and they can see the progress being made thanks to their gifts. It also encourages them to give more because it allows alumni to be an active part of the fundraising process, and better reflects the long-term, consistent relationship brothers and alumni seek.

Think of it this way. If you were an alumnus, would you want to hear from brothers once a year and then be ignored the rest of the time? In the same vein, would you want to be asked to give a large sum of money without being asked to truly engage in the project? What you’re constantly seeking in both cases is a sustained connection.

For these reasons, research shows that alumni are willing to give a higher percentage overall when they are given the option for recurring donations, for instance at a monthly interval, versus a one-time donation.

Recurring Donations Are Good for Alumni, but They’re Also Great for You

Part of what you’re trying to achieve with your alumni base is an ongoing relationship that benefits both alumni and the chapter. Recurring donations will be successful only if your overall fundraising campaign holds the same structured, engaging platform. Thus, this option for alumni giving encourages you as brothers to design a strong platform for your campaign, including a landing page and webpage, detailed plan with a paper trail and ongoing roles for alumni as volunteers.

When you ask alumni for a one-time gift, you aren’t necessarily engaging them to be a part of the project as a whole, and they may be less likely to get involved, or they may give less than they otherwise would.

This type of giving also helps the chapter retain alumni donors. Attempting to engage alumni infrequently for large sums is always a tough sell, and your alumni databases may become out of date if you aren’t engaging them frequently. This makes it hard to locate and build a strong base. With recurring donations, you create an emotionally invested alumni base who give you  a more stable idea of what level of donation to expect on a regular basis.

Alumni Donations Beyond a Single Project

With recurring donations, chapters have the option to engage alumni for non-specific giving. In other words, you may be able to build up a base of regular giving that is not fully dedicated to one project and exceeds the lifespan of a single capital fundraising campaign.

The theme with alumni engagement is always to seek longevity and avoid a pattern of infrequent interactions that leads to estranged alumni and ineffective fundraising. If you have built a regular group of alumni who give recurring amounts, you may go into a project having a certain percentage of a project’s total cost already saved, which can make a campaign less daunting in the long run.

So long as you give due diligence with recognizing your alumni for their contributions, regularly engaging them and offering them sustainable giving options like recurring donations, you’ll begin to see a lot more success in the chapter-alumni relationship.

We’d love to hear some of your thoughts on recurring donations for fraternity alumni in the comments below!