What Alumnae Need to Know about Automated Donations 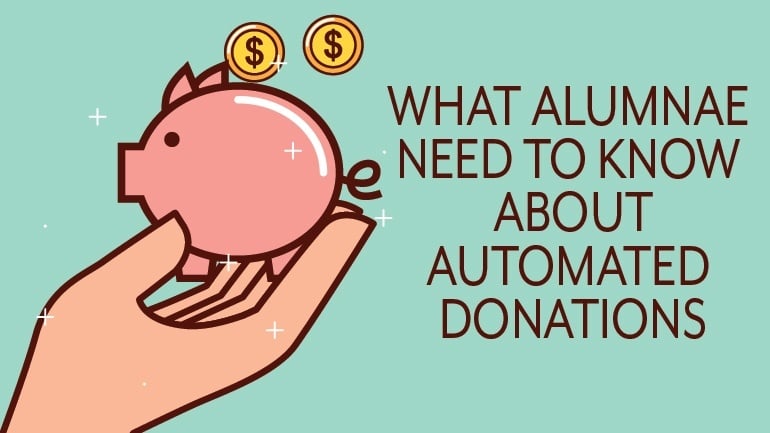 The undergraduate chapter is asking you for money. You understand why they’re asking for money. You even want to donate. After all, the chapter has shown due diligence in engaging a professional fundraising campaign management company, and they’ve presented you with a well-researched plan to renovate the chapter house. It’s all there--all the costs itemized and the current market values laid out.

The house is old. It was old when you lived in it. It’s twice as old now. With things falling apart and safety hazards cropping up all over the place, the time is now to lay the groundwork for a renovation project.

But as much as you want to donate, it’s honestly kind of a hassle the way it’s been approached in the past. The chapter would hint at a project and need for alumnae giving in the sorority chapter newsletter, so last time you gave based on the hazy details they presented, and they ended up needing more--much more. You hadn’t planned for the added expense, so you couldn’t give what they were asking. Also, sometimes they ask for too much up front or don’t have a good system in place. Their website for the project might be confusing, or they might not keep a very good paper trail and you’re not quite sure where your donations went.

Maybe they just never thanked you for what you gave.

These kinds of missteps in chapter-alumnae relations during the donation process, although more likely negligent than malicious, have led to some antagonism between you and the undergraduate sisters. You’re tempted to stop giving altogether. But on the other hand, what they’ve shown you about this renovation project gives the impression that they’ve finally gotten it right this time. They’ve got this whole donation process figured out, too, and part of what intrigues you about this new structure of giving is the idea of automated donations.

But what exactly does this kind of donation process mean for you and other alumnae? We here at Pennington & Company would like to talk with you about exactly that. Here’s What Alumnae Need to Know about Automated Donations.

During a large-scale capital fundraising campaign, alumnae may feel daunted by the bottom line. The amount the chapter needs to pull off their project may range from the tens of thousands to millions of dollars. There will always be a few alumnae who have done exceptionally well in their fields after graduating. They’ve advanced in their careers and have the means to donate large chunks of cash upfront without feeling the drain on their wallets.

You admire their success, but you’re also a bit worried that you can’t give that much, especially not all at once. Are you letting your chapter down? You might even be discouraged into not giving at all. What’s the point, if the other alumnae are putting up those kinds of numbers?

Well, we’re here to tell you that this is a false idea bred by poor alumnae gift management. You aren’t required to break the bank to make meaningful donations, and you certainly don’t have to do it all at once.

Automated, recurring donations empower alumnae to give a reasonable amount at regular intervals during the year, rather than have to write some giant check like Publishers Clearing House. This is a way to personalize donations around what works best for the chapter and alumnae as donors, including amounts, intervals of payment and setting a specific duration of a campaign.

You’re basically just less likely to give throughout the year, period. Because you already gave all you could.

Automated donations give alumnae the tools to let you decide when and what to give. You know better than anyone what works for you. There might be certain months of the year when you’ll have more to give than others, and you can even set up a particular start date for donations to reflect that.

Giving Is Easy with Automated Alumnae Donations, but It’s Not for Everyone

The main advantage of automated donations is that it gives the alumnae donation process structure, both in the giving process itself and how it is managed. The automated payment process will be part of a larger structured system that tracks and reports on donations, sends you reminders and updates and stores this info in a database with other alumnae involved in the fundraising project. You will also be able to check up on and interact with the status of your donations through a software interface on a computer or mobile device.

In other words, it’s easy to manage, and once you’ve got your payments set up, they’ll automatically be withdrawn from your account, like any other bill. That means sisters won’t be constantly badgering you to make additional payments. It’s a more efficient use of your time and theirs.

However, automated donations may not work for everyone. It is not a panacea to alumnae giving; it is simply a tool to make giving easier. If a one-time donation makes more sense for some alumnae, that is also an acceptable approach to gift giving. Ultimately, the goal is for sisters to give alumnae the options that work best for them, and make the process as painless as possible.

Automated donations for chapter capital fundraising campaigns help empower alumnae and encourage a more diverse approach to charitable giving. They’re also easy to manage. If a structured, automated donation process makes sense for you, talk to your chapter about whether they have a system in place for this, or if not, suggest they set one up.

What has been your experience with alumnae donations? What do you think works best when it comes to your giving? Let us know in the comments below!