You're Renovating Your Fraternity House, but What Should You Renovate? 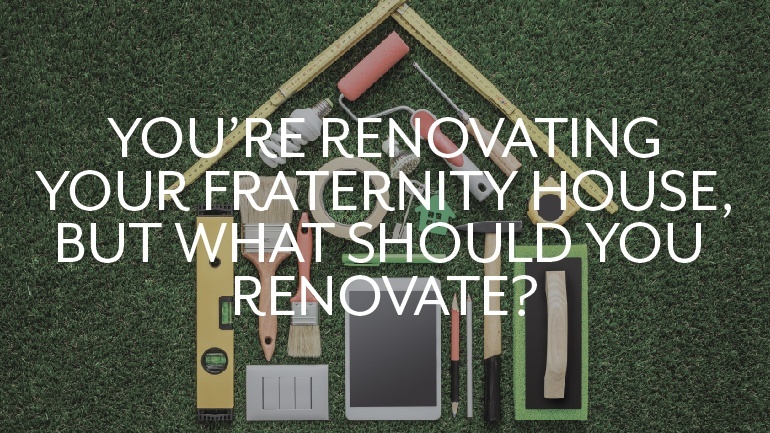 Most fraternity houses have tons of history between their walls. These are structures that have seen chapters come and go over the decades. Some have been around since the founding of their chapters, and sometimes trace their origins to the pioneering efforts of the first Greeks on their respective campuses.

They’re old, in other words.

On the one hand, this means they have character. They have soul. Think about all the brothers who have passed through a house’s doors during their undergraduate careers. That old brick fireplace holds all the ghosts of past nights where young collegiate men would sit around and tell stories. The exposed rafters have given shelter to many a brother.

However, a lot of the older aspects of a fraternity house that may have once seemed quaint will eventually become  a pain in the butt--posing safety risks, falling apart and failing to suit the chapter’s needs.

Even if the brotherly spirit of your fraternity never fades, paint does.

Therein lies the rub: You want to renovate your fraternity house, but you also don’t want to destroy the spirit of the place you and so many of your brothers have called home over the years. What do you do? You’re renovating your fraternity house, but what should you renovate? Don’t panic and start throwing sledge hammers at the walls just yet. Pennington & Company is here to help you cure your renovation woes.

First Figure out What You Need, Not Just What You Want

The thing about approaching alumni for donations to major fundraising capital campaigns is that they’re going to want a professional plan that’s well thought out and puts their hard-earned money to good use.

And when you’re renovating your fraternity house, trust us when we say you’re going to want the alumni on your side.

An updated game room and a slick, new second-floor deck overlooking a heated pool may sound really cool, in theory. If there’s enough money left over, sure, go nuts. But that can’t be the main selling point of this renovation if your house is also in dire need of, say, fire escape and sprinkler system updates, new roofing and a new wing with a chapter library to replace the previous one that was water damaged during a hurricane.

Prioritize anything that needs to be repaired or updated to current safety standards. Anything that is essential to chapter house operations (like kitchen and dining spaces, living quarters, bathrooms and study areas) are also important. That Olympic-sized heated pool might actually help out with recruitment efforts, but it’s no replacement for the serious work of recruiting brothers who share your chapter’s core values. Thus, the fun stuff comes last on the list.

When you assess the feasibility of renovating your fraternity house, make sure to focus on what you need most, so you and your alumni see the same value out of what they’re giving.

Renovate by Looking to the Future, but Don’t Abandon Your Fraternity House’s Past

If you look to update certain long-standing aspects of your fraternity house’s structure during a renovation project, you might accidentally tear down some piece of tradition and history that can never be regained. So before you go willy-nilly updating everything to look like the Jetsons’ house (you aren’t getting a flying car, Ron!), take stock of what really matters.

If a famous architect designed the exterior of the house using a certain style of the era in which it was erected, you may want to renovate within the spirit of the original design. The same goes for inside the house. If you have century-old iron rail banisters, or a brick fireplace from long, long ago, or oak floors that’ve been tread by hundreds of brothers’ feet, consider either keeping them whole stock with some touchups, or incorporate original materials into the modernized aspects of your renovations.

This will also help you with fundraising, because you can show alumni that you aren’t just looking for the next cool upgrade to the house--you’re trying to retain what made it so great for them when they lived there, and enshrine it into the future.

Ask Alumni What You Should Renovate in Your Fraternity House

That’s right. You don’t get to decide everything, Ron!

If you think Ron is an annoying recurring character, we apologize. Just listen to our advice and you’ll never have to worry about him again.

The point is that, unlike Ron, your alumni likely have some very definite ideas about what could go into a potential remodeling project of your fraternity house. They’re going to likely be donating a sizeable chunk of money toward your fundraising campaign, so they deserve to be a major part of the decision-making process as well. Get them involved.

First, give alumni the information they need. Hire professional fundraising consultants who can assess your renovation project and help manage it each step of the way. Share detailed reporting on the project with alumni so they have the info they need to weigh in.

Making your alumni an ongoing part of the process of renovating your fraternity house will show them you’re interested in their input and participation in bettering the chapter, not just emptying their wallets.

Building alumni relationships can go a long way in fostering giving for large-scale fundraising capital campaigns such as for renovating a fraternity house. Relationships are built on respect. So have candid conversations about what’s going to get renovated in your fraternity house, based on the numbers.

Renovations of fraternity houses should be based on needs before wants, respectful of history and tradition and include the guidance of your esteemed alumni. We’re confident you’ll end up with an amazing end result once you follow these recommendations for when you’re renovating a fraternity house, but you aren’t sure what to renovate.

Are you planning a fundraising campaign for a fraternity house remodel, or have you remodeled in the past? Tell us about your experiences in the comments below!