Sorority Officer Turnover, and How Alumnae Fill the Gaps 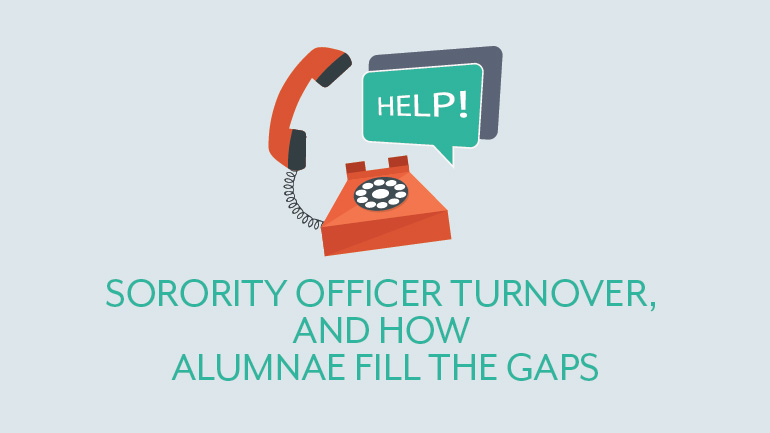 It’s a sign of a healthy sorority chapter when sisters want to take the helm.

They want to show that they’re leaders, and they prove this by their actions every day. They keep up their GPAs, they give their time and effort through philanthropy, and they still manage to throw some amazing social and formal events.

Not only that, but they’ve really stepped up their alumnae engagement. The chapter’s firing on all cylinders.

Then comes time for a sorority capital fundraising campaign.

Chapter alumnae engagement chair: “We got this.”

Spoiler alert: They don’t “got this.”

It’s not that undergrad officers don’t have the willpower or intelligence to engage and fundraise at a higher level.

As full-time students, they don’t have the resources.

And as chapter officers, they don’t have the time. The turnover for an officer position like fundraising or engagement means their projects must be limited in time to their term, or the result will be inconsistent without broader oversight.

Remember that a new officer must learn everything from scratch, and she may have a different temperament and approach to project goals than the outgoing officer.

When you’re raising hundreds of thousands of dollars for a sorority house renovation over several years, inconsistency spells certain doom.

Housing corporation alumnae have the experience, priorities and resources to provide necessary management and oversight during a capital campaign and beyond.

Just as sorority advisors guide chapters in their overall vision and direction, an HC volunteer can guide chapter fundraising campaigns and donor engagement.

Undergrad members have a responsibility to engage alumnae in the areas of involvement, communication and gift giving.

That’s where alumnae come in.

Alumnae Don’t Have the Turnover

Since alumnae have already graduated, and aren’t full-time students, they don’t leave alumnae organizations after only a short-term commitment.

Thus, they have a more linear understanding of chapter and national priorities over time.

They have limited roles within the chapter and are not trained or qualified in any specialized way, other than the basic officer transition period.

This lack of turnover and added experience means alumnae can help manage engagement as the undergrad officer position changes hands, and smooth engagement initiatives for consistency.

Consistency is central to all sorority activities. This goes double for fundraising engagement.

In this way, Alumnae can help make their chapter an indispensible participant in the national sorority’s future.

Alumnae Have the Insight

Pre-capital campaign planning requires specific insights into potential alumnae donors, their motivations for giving and the feasibility of reaching a given campaign goal.

Undergrad sisters aren’t dialed in to the donor base in the same way alumnae volunteers are.

A capital campaign requires detailed strategy and intimate knowledge of the donor base. You need to know:

Alumnae will more easily access this information through interviews or conversations with their peers, and the fact that they already have a basis of knowledge about alumnae donors’ behavior.

They can also provide the insight of experience, and help manage the broader goals of chapter-alumnae engagement.

Since chapter officers aren’t equipped to handle the specialized management needs of a capital campaign, alumnae must fill that role.

Say, for example, that your campaign will fund a housing project, as is often the case with sorority chapters.

It’s the housing corporation who can best understand house funding needs, assess the local student housing market, engage builders and contractors, and frame the campaign within the bigger picture of the national sorority and its goals and values.

A chapter fundraising chair simply isn’t designed to handle a major campaign that’s so research, resource, and time-intensive within a single term.

Alumnae should assess the state of the housing corporation’s policies, funding, management techniques and current membership to prepare for a campaign and strategize management roles.

Who would best serve as campaign leadership? Who should be recruited as additional campaign volunteers?

Alumnae can also delegate when necessary to partnering consultants and experts, who can guide in the process of pre-campaign feasibility, donor engagement and fundraising execution. Delegating can help ease the strain on alumnae volunteers, who may need to apply their resources to a variety of projects.

Their duties to the chapter must never undercut their academic success. They shouldn’t be expected to exceed the limited requirements of an officer position within a single term. They shouldn’t be asked to reach beyond their abilities, training and resources.

While alumnae can help elevate the success of undergrad officers when it comes to general engagement, they should take a lead role with major capital campaign success.

How has officer turnover affected your chapter’s fundraising and engagement over time? Has alumnae oversight helped? Let us know in the comments below.